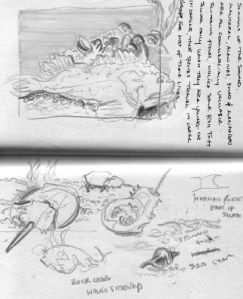 Mixing and blending, rising and falling.  The estuarine waters are constantly shifting between salty and fresh.  The mixing often forms a layered gradient which determines what can live there.

The tidal ecosystems of the Hudson are vital to the health of the river.

The forest filters and neutralizes some pollutants such as acid rain and helps keep them out of the Hudson.  The forest stabilizes land because roots tend to hold soil together.  When the trees and large plants are cleared from river banks, erosion can result.  Eroded soil and rock adds to the            rivers’ load of sediments, impacting both plant and animal residents. 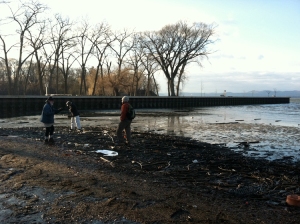 A small handful of artists stood on the littered filled beach in Croton Point Park shivering. It was 3:30 pm, afterschool on a Tuesday. The wind chill was strong enough where we felt the numbness in our covered toes & fingers. We met Chris Letts, a Hudson River Foundation educator, fishermen with a passion for history and nature on the shore for a beach combing experience.  He wore shorts, leggings, a light anorak, bright eyes, and a big bearded welcoming grin. He was once described by a girl scout as “a wonderous creature“.  I can not find more suitable words that fit him like this one.
At his feet lay an empty bucket, a pair of goggles, a single flip flop, a coconut and a piece of driftwood. He went through these items, mentioning the regularity with which these particular manmade pieces appear. The coconut at a time used to drift all the way from tropical islands, now immigrants in NY have contributed to it’s frequent appearance on the shoreline. When he came to the piece of wood, he stopped, took a sniff and said, “from a 1970 crate of heavy Scottish  brandy.” We were all puzzled & amazed at the accuracy of his smell & laughed when we all caught on to his joke.
We continued walking along the shore as he pointed out how the waves clearly sorted out the debris in a diagonal fashion. Weight, wind, and currents left an organized mess on the beach.  Surprisingly, a majority of the “stuff” was natural.  A few of us picked up unfamiliar objects that Chris identified, one by one. We moved from topics of endangered species, invasive ones, historical facts and movements of climate and impacts of man. We learned how one native species like the rainbow smelt, no longer are found in local waters due to rising temperatures.

The tour continued to Georges island where an active marshland is divided on one side by salty water, the other side by fresh. The story is the island got it’s name because every African American that passed through, many of which assisted in various farming industries including brick making was called “George”.
We ended the day with our extremities close to frozen and the sun setting as we drove by Greens Cove in Verplanck.  Here Chris spotted an amazing bald eagle flying by.  We stopped and found her hidden nest through his telescope sitting on the treetops across the river, out of mans reach, admiring her beauty.

Aggressive young bluefish growing in an estuary go on occasional feeding frenzies, attacking large schools of small fishes.  The water churns and bubbles as the bluefish tear apart their prey!

I heart NY.  Why you ask?  We live in a State where we are richly endowed with more than 7,600 freshwater lakes, ponds and reservoirs.  The inland waterbodies supply us with drinking water that comes straight to our faucets – that we share with over 200 species of neighboring fishes.   In knowing that the entire earth is made of only 3% fresh water, we should consider ourselves blessed.  So, this week when you make use of New York’s water, (ie. flush the toilet, shower, wash the dishes, brush your teeth, etc) give thanks and give love to the Empire State.

The Opening of FishTalesJune 7, 2012
The big day is here.